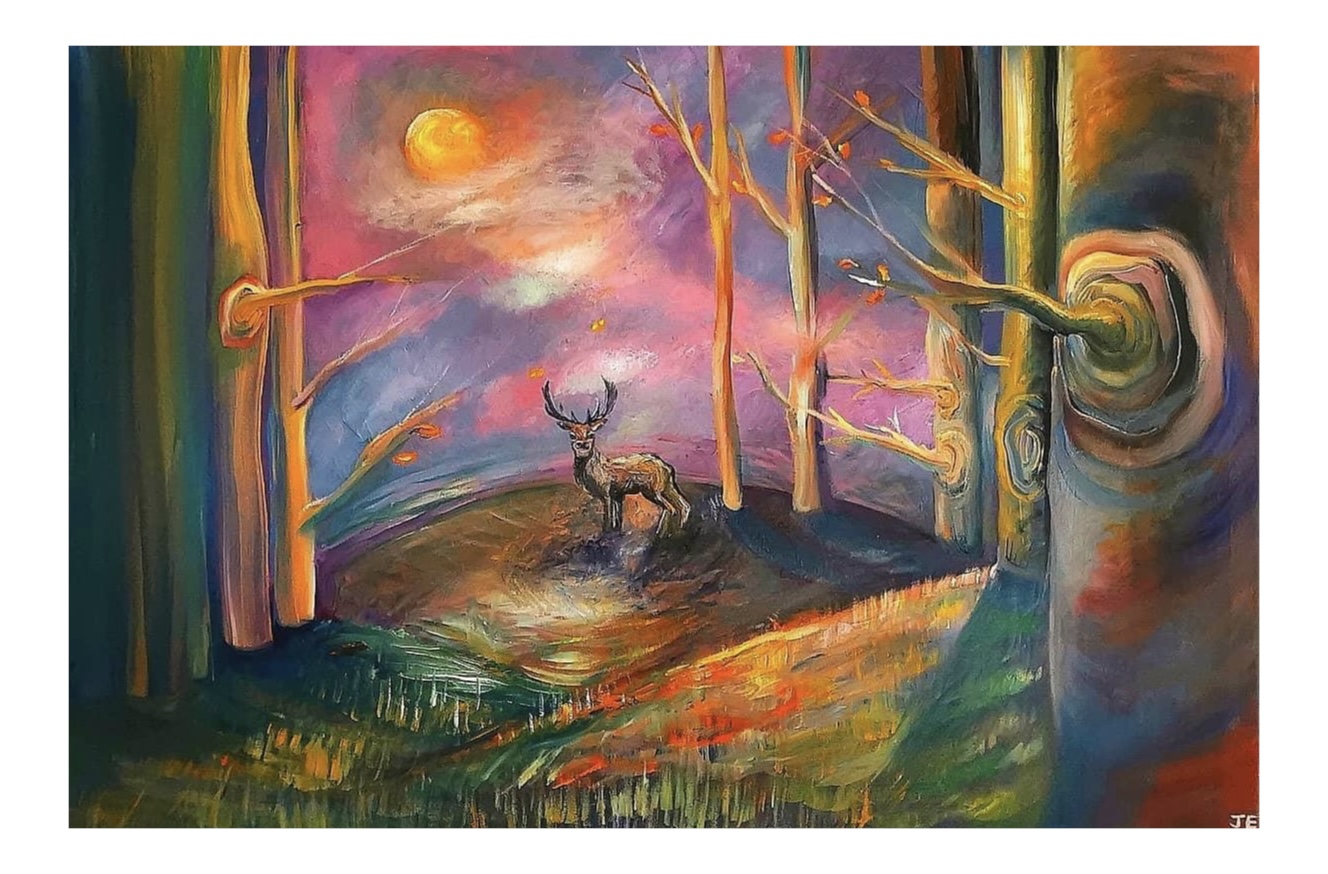 I enjoy creating focal points in paintings and have always been interested in wildlife and nature. As a child, I was always puzzled by antlers and associated them with being a stags version of a crown. In this painting, I have amplified the colours most people associate with autumn and exaggerated specific shapes, such as the knots you find on trees. I like my art to have a surreal and dreamlike quality that reflects what is typical of my painting style when using my imagination and no reference point. 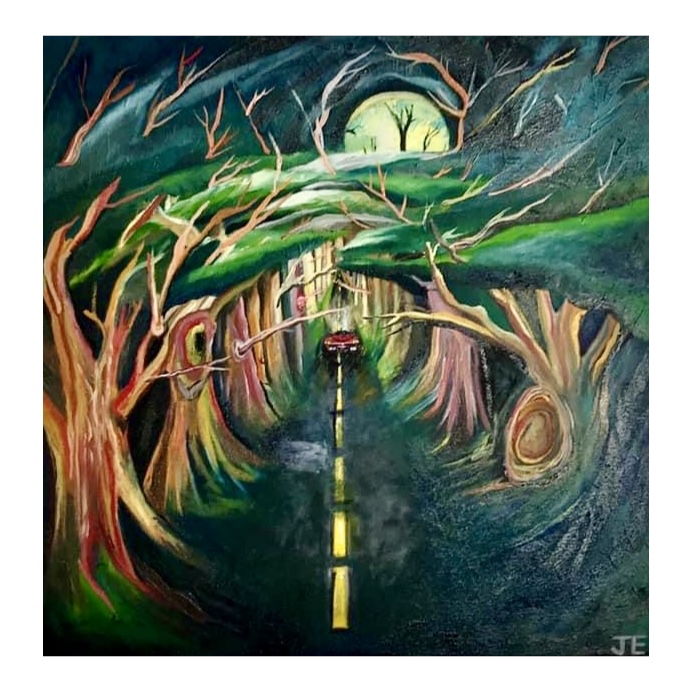 Four years ago, I was made redundant from my day job in the first week of lockdown during the Covid-19 pandemic. I decided there and then to throw myself into painting, determined to make it as a full-time artist. For the first year, I would start painting from 7 am to 5 pm and then continue from 8 pm to 1 am. It was all very uncertain whether I would make a living from art. I painted my way through the uncertainty, the worry, the imposter syndrome, and the disbelief until I finally broke through. Sometimes it's best to keep on swimming than to pause and let self-doubt take hold, which is what this painting signifies. 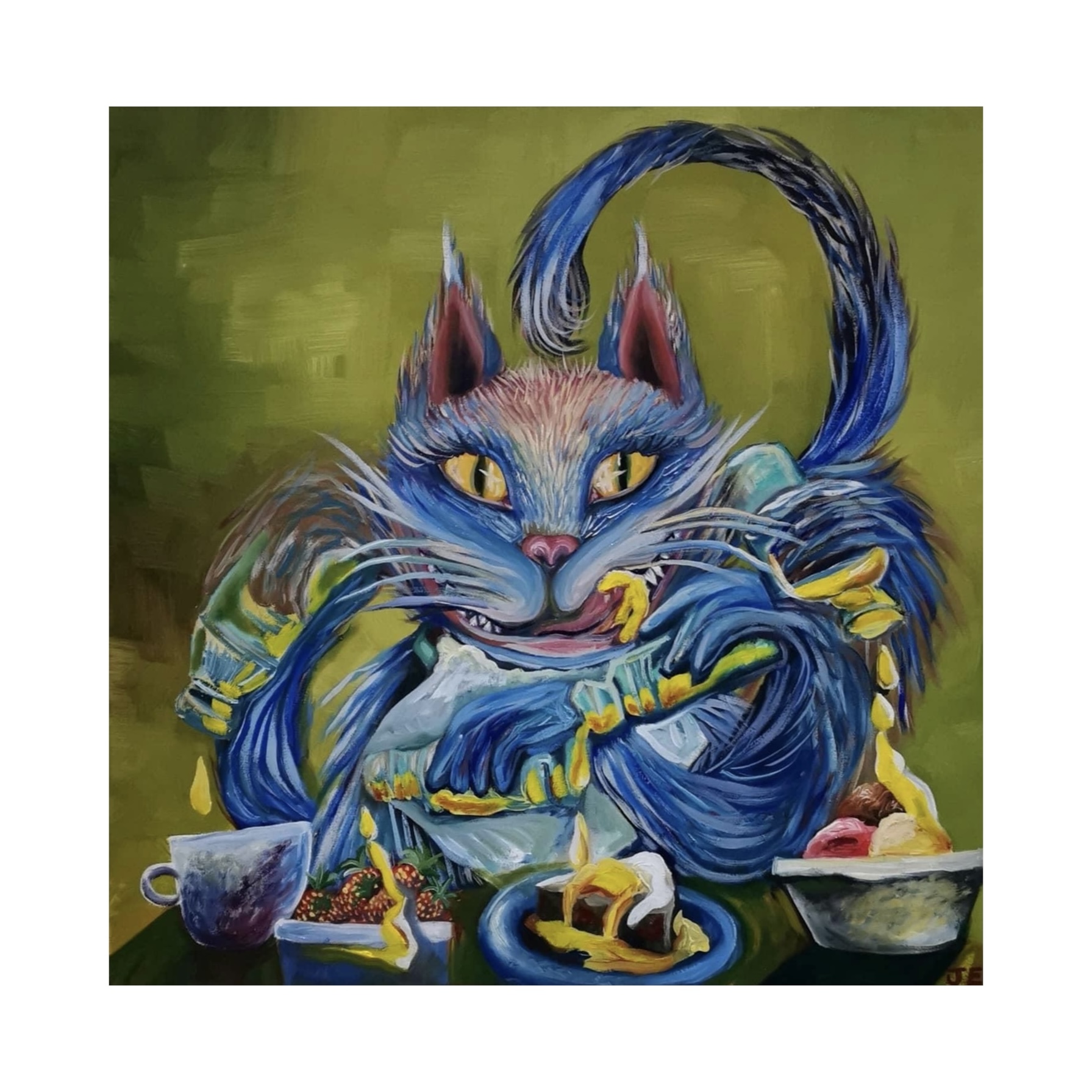 Cat Got The Cream (SOLD)

As a child, I had a fascination with Alice in Wonderland. The Cheshire cat always appeared to me as superhuman, not tangible and seemed to float in and out of consciousness. His character stands independently and is immune to Wonderland's complications and confusing scenarios. His mischievous nature inspired the title 'Cats Got The Cream', which describes an individual pleased with what they have achieved. I wanted to give the perception of the Cheshire Cat being 'super human' by showing him pouring cream over three different objects at lightning speed such as - strawberries, ice cream, coffee and cake. Having read Lewis Carol's novel, Alice in Wonderland and watched various remakes of this much love book, the Cheshire Cat had a lasting impression on me, but his back story remained a mystery. 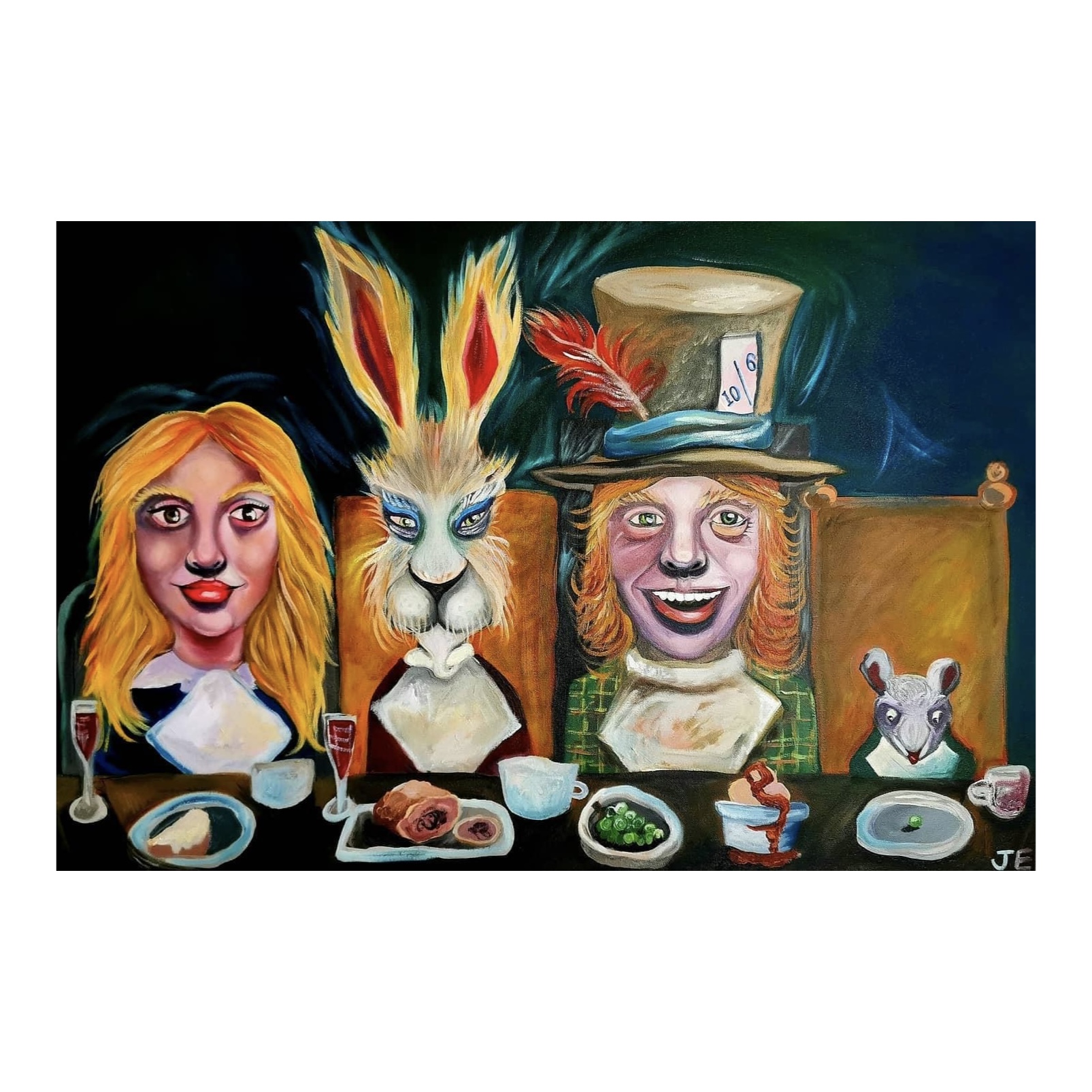 As part of my Alice in Wonderland series, I wanted to create a memorable tea party scene showcasing the Mad Hatter, March Hare, Alice and The Mouse with no background to distract from their expressions and the viewer's perception of what they may or may not be feeling. 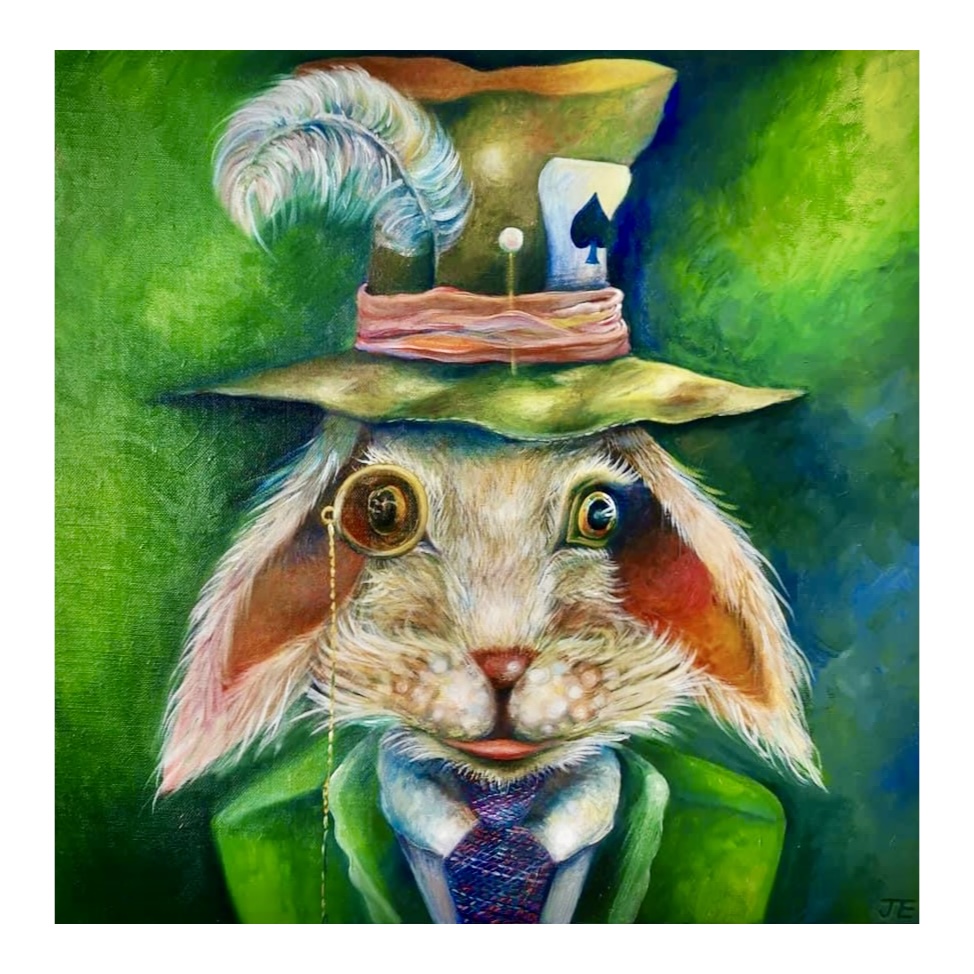 Medium - Oil on Canvas Size - 50cm x 50 cm (Framing available). This painting is part of my Alice in Wonderland series taking inspiration from a restaurant I visited with big open fires, tartan furniture, pictures of hares, pheasants, and mahogany tables with gold cutlery. I love that typical English country decor and wanted to create a fictional character that wouldn't look out of place in a similar, comfortable and familiar environment. I intended to make the character look typical of what many would associate with being British, with a stiff upper lip expression. 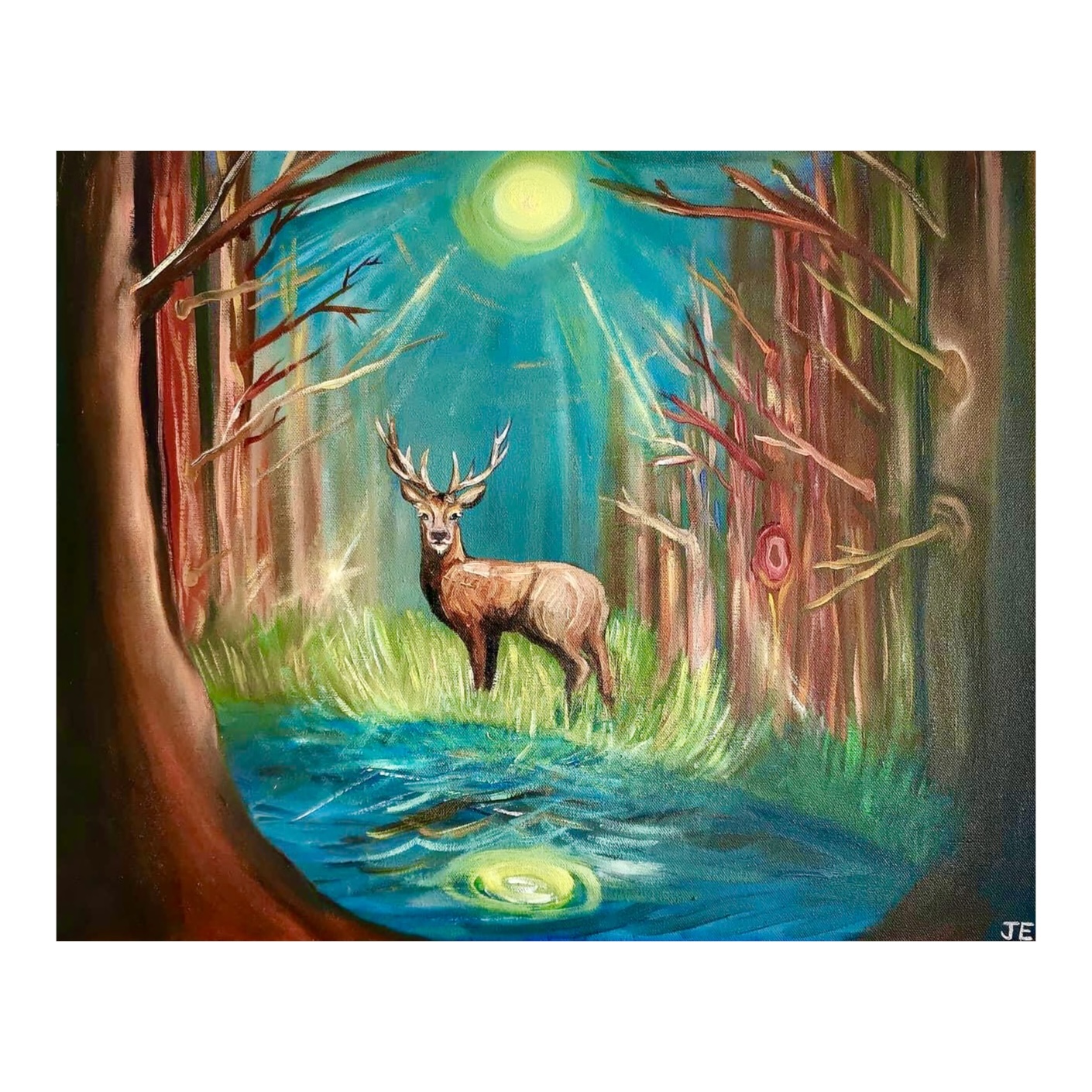 I enjoy using bold brush strokes and sometimes even integrating painting methods from when I was a child. I love using bright contrasting colours, creating a focal point, and reflecting light in water, woods, and hillsides. 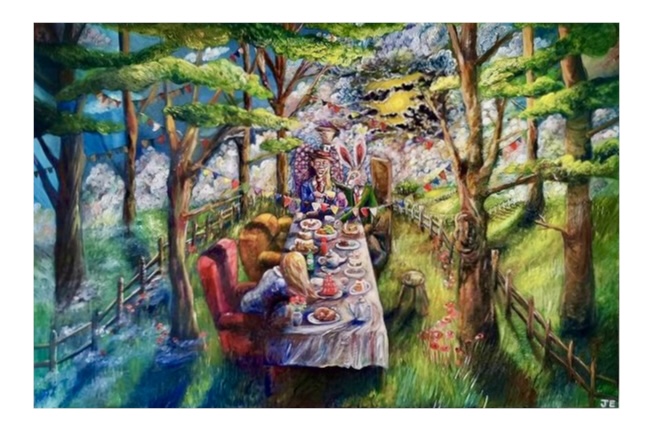 As part of my Alice in Wonderland series, I have created the Mad Hatters tea party when the meeting is coming to a close. I wanted to make the painting relatable by having Alice slumped at the end of the table, listening to the ramblings of the Mad Hatter. The March Hare is still engaged and sitting upright, and the Mad Hatter is brimming with energy and charisma. We have all been to functions or sat in meetings where somebody is drunk or likes the sound of their voice. Not sure it's a British thing, but we often find ourselves being too polite to leave, even when we're falling asleep.